How to generate ASCII Art Text from the CLI using Figlet in Ubuntu 18.04

Learn how to generate ASCII art text from the CLI using Figlet.

Does anyone remember those key generators that you used to activate those genuine programs for free? They always included the signature or name of the group with ASCII art like this:

Normally you would imagine that they generated this manually, however, there are a lot of tools that allow you to generate automatically the ASCII art from plain text. In this article, I will explain to you how to easily install and use Figlet on your Ubuntu 18.04 server or desktop.

FIGlet  prints  its  input  using  large  characters  (called ``FIGcharacters'') made up of ordinary screen  characters  (called  ``sub-characters''). FIGlet output  is  generally reminiscent of the sort of ``signatures'' many people like to put at the end of e-mail and UseNet messages. It is also reminiscent of the output of some banner programs,  although it is oriented normally, not sideways. The Figlet package is available directly from the APT repositories of Ubuntu. Run the following command in the terminal:

After the installation, the figlet tool will be available from the command line. The tool accepts the following options:

Figlet it's really easy to use, simply pass as positional argument the text that you want to convert to its ASCII art version and that's it:

You need to use custom figlet fonts (.flf) to print text in ASCII characters with custom styles. In this Github repository, you can find multiple fonts that you can use with Figlet. Simply download the repository with git in your server/computer:

Then run the figlet commands as usual, however, add the 2 extra parameters to specify the new directory of the fonts and the name of the font that you want to use:

In our case, we will print the "Our Code World Rocks!" with the 3D Diagonal.flf font downloaded from the mentioned repository:

The command in the terminal would output the following text: 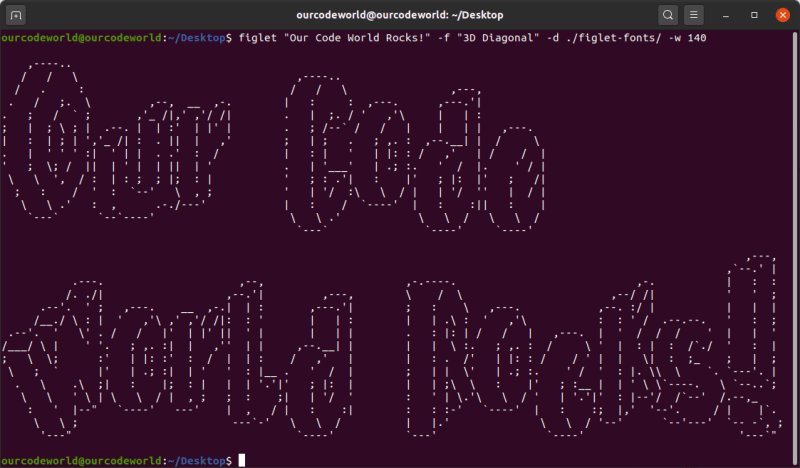 If instead of printing it to the terminal, you want to save the output into a file, simply pipe the output to the file that you want. For example, to save the content into a plain text file:

How to use and build autotrace from source in Ubuntu 18.04

How to solve Ubuntu 18.04 CLI error: Could not get lock /var/lib/dpkg/lock-frontend - open (11: Resource temporarily unavailable)

How to extract the melody from an audio file and export it to MIDI (generate quantized MIDI) using Python in Ubuntu 18.04

Creating your own Shazam (identify songs) with Python through audio fingerprinting in Ubuntu 18.04

How to create and configure your own STUN/TURN server with coturn in Ubuntu 18.04

How to check system specifications in Ubuntu Server 16.04 with the CLI