The face_recognition library is widely known around the web for being the world's simplest facial recognition api for Python and the command line, and the best of all is that you won't need to pay a dime for it, the project is totally open source, so if you have some development knowledge and you are able to build a library from scratch, you'll surely know how to work with this library.

In this article, we'll teach you how to install, setup and use basically the python library "face recognition" in Ubuntu 16.04.

Before proceeding with the usage of this library, you will need on your system:

In this tutorial, we'll follow the installation of the library with Python 3.

Your system needs CMake installed, an open-source, cross-platform family of tools designed to build, test and package software. CMake is used to control the software compilation process using simple platform and compiler independent configuration files, and generate native makefiles and workspaces that can be used in the compiler environment of your choice. The suite of CMake tools were created by Kitware in response to the need for a powerful, cross-platform build environment for open-source projects such as ITK and VTK.

If it's not installed in your system, you can run the following commands to install it:

Before proceeding with the usage and installation of the face recognition library in Python, you will need the distributable of dlib installed on your system and the python binding as well. Dlib is a modern C++ toolkit containing machine learning algorithms and tools for creating complex software in C++ to solve real world problems. It is used in both industry and academia in a wide range of domains including robotics, embedded devices, mobile phones, and large high performance computing environments. Dlib's open source licensing allows you to use it in any application, free of charge.

Then, proceed to build dlib with the following commands:

This will start the build process and once it finishes, the native library of dlib will be available in your system. For more information about Dlib, please visit the official website here.

After building dlib, switch again to the cloned directory in the previous step:

And proceed with the installation of the python bindings running the setup.py file with Python 3 with the following command:

This will install the binding and you will be able to import dlib later in your Python code. In case that you face the following exception during the execution of the previous command:

Install the Python 3 setup tools with the following command:

This also provides a simple face_recognition command line tool that lets you do face recognition on a folder of images from the command line easily. You can install it with the following command:

The installation will take a while to download and install, so be patient.

If you don't have pip3 installed, install it with the following command:

For more information about this library, please visit the official repository at Github here. After installing the library, you will be able to use it either from the CLI or your python scripts.

When you install face_recognition, you get two simple command-line programs:

You will have as well the possibility of import the library in your scripts and use it from there !

In our command, we'll identify this directory as our source of images. In other directory, we'll store the image of the celebrity that we want to identify from our database, obviously we'll use one of the regitered celebrities, but with another image: 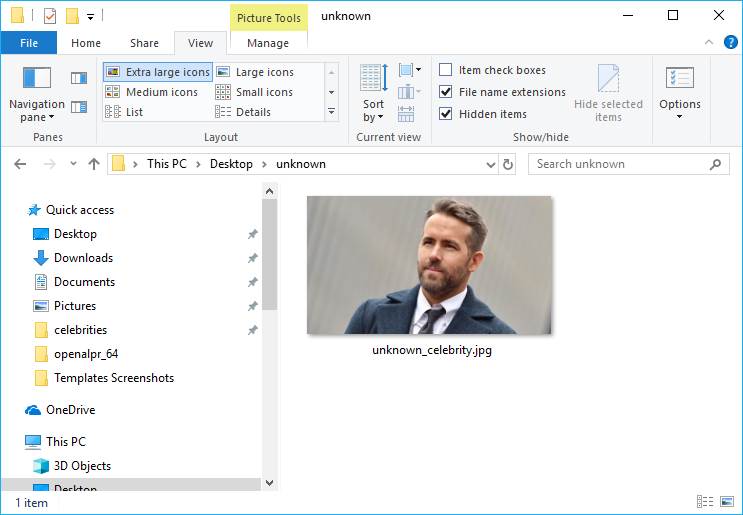 The logic is the following, the library will use the directory of images celebrities as database and we'll search from who's the image(s) stored in the unknown directory. You can run the following command to accomplish the mentioned task:

Then, the output will be:

The command will output the path to the image that was processed, in our case unknown_celebrity.jpg and will add the name of the matched image from the celebrities directory as suffix. In this case, the library was able to identify the actor Ryan Reynolds from our images. Note that this can work with multiple images as well.

As mentioned, the CLI utility is just an extra, one of the fun facts is the hability of writing some code by yourself and identifying the faces with some logic, for example:

This will generate the following output:

As you can see, you can obtain the coordinates of the identified faces in the image after the first comma of the string. You can use it with your code as well: