An application that doesn't load images, is pretty weird and boring nowadays. Knowing how to display an image in your mobile application is one of the most common tasks for every developer. However, the way you work with them will be different for everyone, due to the way you code your app to handle the image. For example, website developers doesn't need to take care about image caching because the browser does this automatically, but for an android developer, an image will be normally loaded again and again (if we are talking from a remote/web source) without really good performance. If you are willing to display efficiently images on your application, you need to take care about the image caching.

In this top, we'll share with you 10 of the most imponent image caching libraries to increase the performance and loading times of your Android Application.

Mirage is an image loading library developed by the Android team at The Climate Corporation for loading, caching, and sync'ing for offline usage of images. Our main consideration for creating this system was to allow for explicit sync'ing of images for offline use. Libraries like Picasso didn't fulfill our requirements because as stated "Picasso doesn't have a disk cache. It delegates to whatever HTTP client".

An image download-and-cacher that also knows how to efficiently generate and retrieve thumbnails of various sizes. This library features:

Shutterbug is an Android library that lets you fetch remote images and cache them. It is particularly suited for displaying remote images in lists or grids as it includes a convenience subclass of ImageView (FetchableImageView) that make implementation a one-liner.

A dual memory and disk cache was implemented. It makes use of two backports of Android classes: LruCache for the memory part and DiskLruCache for the disk part. LruCache was introduced by API Level 12, but we provide it here as a standalone class so you can use the library under lower level APIs. Both LruCache and DiskLruCache are licensed under the Apache Software License, 2.0.

Shutterbug was inspired by SDWebImage which does the same thing on iOS. It uses the same structure and interface. People who are familiar with SDWebImage on iOS will feel at home with Shutterbug on Android.

Sligh is an easy, sample and flexible library for loading, caching and displaying images on Android written in Kotlin.

ION is an Android Asynchronous Networking and Image Loading library. This library features:

SmartImageView is a drop-in replacement for Android’s standard ImageView which additionally allows images to be loaded from URLs or the user’s contact address book. Images are cached to memory and to disk for super fast loading. This library features: 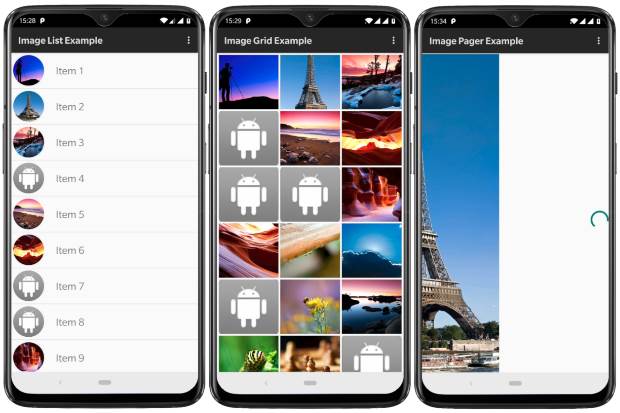 An Android library for managing images and the memory they use. Fresco takes care of image loading and display, so you don't have to. It will load images from the network, local storage, or local resources, and display a placeholder until the image has arrived. It has two levels of cache; one in memory and another in internal storage. In Android 4.x and lower, Fresco puts images in a special region of Android memory. This lets your application run faster - and suffer the dreaded OutOfMemoryError much less often. Fresco also supports:

You can find out more at their website here.

Picasso is a powerful image downloading and caching library for Android. Images add much-needed context and visual flair to Android applications. Picasso allows for hassle-free image loading in your application—often in one line of code! Many common pitfalls of image loading on Android are handled automatically by Picasso:

Adapter re-use is automatically detected and the previous download canceled. If you would like to contribute code you can do so through GitHub by forking the repository and sending a pull request. 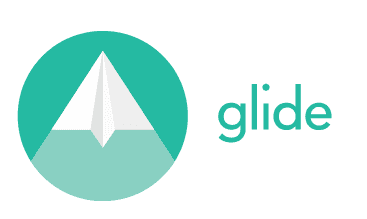 Glide is a fast and efficient open source media management and image loading framework for Android that wraps media decoding, memory and disk caching, and resource pooling into a simple and easy to use interface. Glide supports fetching, decoding, and displaying video stills, images, and animated GIFs. Glide includes a flexible API that allows developers to plug in to almost any network stack. By default Glide uses a custom HttpUrlConnection based stack, but also includes utility libraries plug in to Google's Volley project or Square's OkHttp library instead.

Glide's primary focus is on making scrolling any kind of a list of images as smooth and fast as possible, but Glide is also effective for almost any case where you need to fetch, resize, and display a remote image. Glide takes in to account two key aspects of image loading performance on Android:

For users to have a great experience with an app, images must not only appear quickly, but they must also do so without causing lots of jank and stuttering from main thread I/O or excessive garbage collections.

Glide takes a number of steps to ensure image loading is both as fast and as smooth as possible on Android: 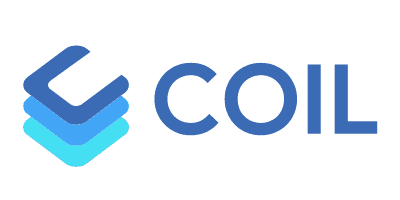 An image loading library for Android backed by Kotlin Coroutines. Coil is:

Coil is an acronym for: Coroutine Image Loader.

If you know another awesome image caching library for Android, please share it with the community in the comment box.