A rating of a feature of your application, products or other qualifiable stuff allows something to be measured as something useful, regular or even useless thing. If something on your app needs to be rated, you need to implement a graphic solution so the user will be commited to interact with your app (stop forcing users to write numbers in plain inputs for the love of god !).

In this top, we will share with you a collection of 10 of the most useful and simple to use Rating Bar components for your Native Android Application.

RatingBar is a custom widget use to display rating in star. It aims to replace the builtin RatingBar in android sdk and very easy to use and customise. RatingStar is specific RatingBar use star drawable as the progress mark. Smiley-Rating is a custom way to greet your users with a smile while they give awesome Feedback about your app. Because a lot of projects need this feature, but the android itself on the propagation of the Ratingbar support is very bad, so this developer intended to write his own component. Inspired by stock android RatingBar, ProperRatingBar is a Simpler implementation of a rating bar that has features that the original lacks. Well, stock Android RatingBar lacks some styling attributes that you would expect from it and sometimes offers unexpected behavior. Besides that, we needed to use symbols like '$' as rating bar ticks in our project - none of third-patry libraries out there provides that functionality. SimpleRatingBar is an open source project which features a simple yet powerful RatingBar alternative to Android's default: This is a very simple RatingBar library, which you can just simply extend BaseRatingBar to implement your own animation RatingBar in a few steps! Currently the plugin offers three RatingBars : 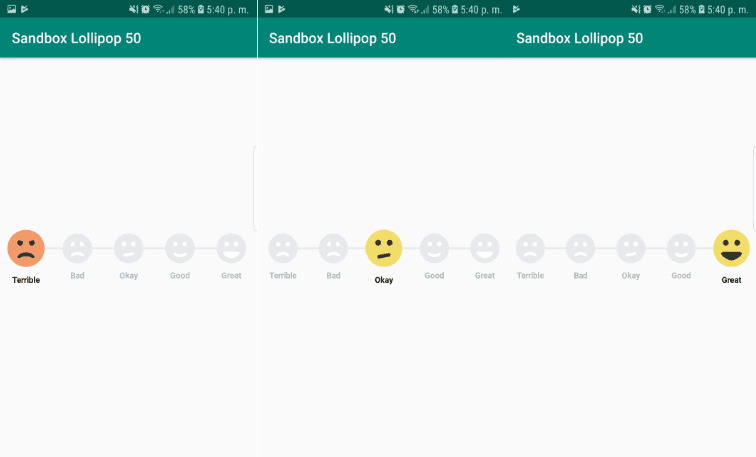 SmileyRating is a simple rating bar for android. It displays animated smileys as rating icon.

The widget can be easily embed in any part of your application where there's a layout. Material Design RatingBar implements a widget for rating stuff but with a better appearance, compatible with Android 3.0+.

If you know another awesome open source component to implement a rating bar in your android application, please share it with the community in the comment box.