CefSharp will be always the best open source solution to create graphical user interfaces with HTML, CSS and JavaScript. However, in the commercial side, there are a lot of companies that rely on Sciter for the UI of their application. Sciter is an embeddable HTML/CSS/script engine for modern UI development. Sciter brings a stack of web technologies to desktop UI development. Web designers, and developers, can reuse their experience and expertise in creating modern looking desktop applications.

Advantages of Sciter in comparison with CefSharp? Well, an empty application that implements CefSharp will be at least of 40MB, while Sciter only about 13MB. To implement Sciter on your C# project, we'll install the native C# bindings for Sciter created by @MISoftware.

The first thing you will need to use sciter, is sciter itself because the native bindings doesn't provide the source of sciter. Open the official website of Sciter and go to the downloads area and click on the Download SDK Button.

Don't worry about the download filesize of the SDK. It usually is about 50MB (with all the platforms iOS,Android etc), however for C# we will need to copy only around 12MB.

From the zip file, you will need to copy all the content inside the bin folder according to your platform:

Be sure to do correctly this step, otherwise later while you try to run your application you will get an exception, namely:

As next step, we need to add the native bindings for Sciter in your project. Open Visual Studio, Open your project and go to the solution explorer on the top right corner of VS and do right click on your project. From the dropdown select the Manage NuGet Packages option: 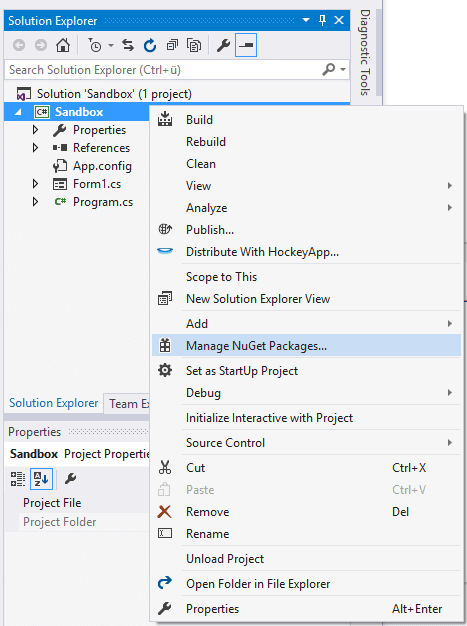 Then on the emergent window, search for SciterSharpWindows and install the package on your project: 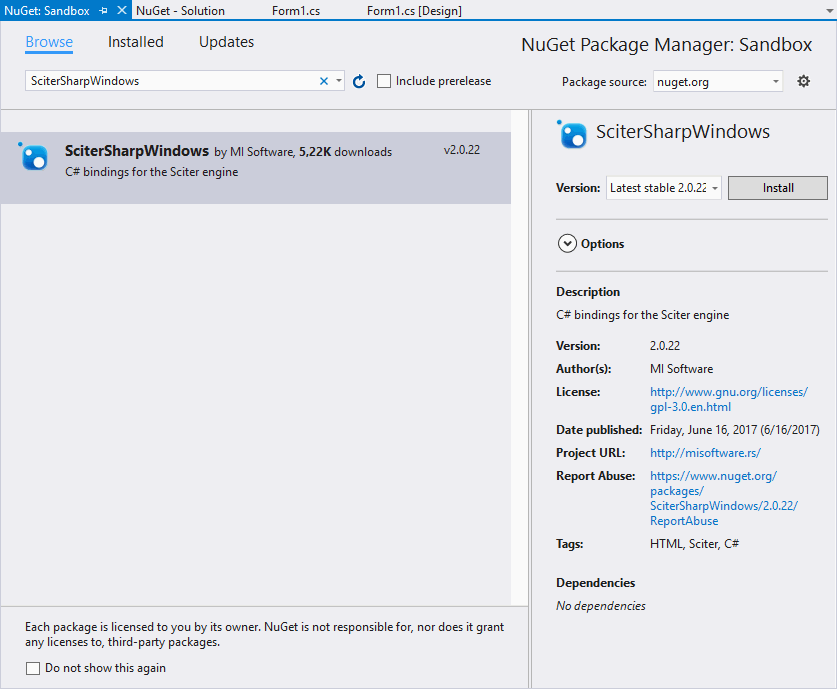 3. Add control to your form

As next, import the SciterSharp type in your form class (at the top of your class):

Then, on the formload event of your main form, proceed to create the Sciter element but before, expose the SciterElement on your class to make it accesible for other methods. Then create the element, add the HandleCreated callback and append it to the form. In this case we'll render it on the entire form by setting the Dock property of the element to Fill:

The previous example would generate the following form: 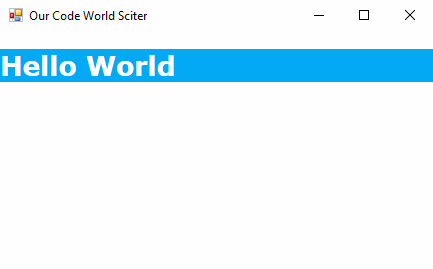 And that's it ! You can use easily Sciter in your WinForm application to create awesome and impressing graphical user interfaces. For more information about how does the scither JavaScript,CSS and HTML interface works, please refer to the official documentation of the Sciter project.